Historical Notes About Our Bells

1985: The Bells of Russia. History and Technology

The largest of seven Russian bells at Holy Trinity Orthodox Cathedral in San Francisco was cast in 1888 at the Moscow bell foundry of N. D. Finliandskij. The inscription on the sound-bow records that it weights 144 puds 5 funts (5,205 pounds) and that it was founded “In memory of the miraculous rescue of the Russian Emperor Alexander III, together with the imperial family, October 17 [1888].” On that day the tsar and his family narrowly escaped with their lives in a train accident near the town of Borki in the Ukraine. (The San Francisco bells later narrowly escaped destruction themselves. Several days before the earthquake of April 18-19, 1906, they had been removed from their belfry in the old cathedral on Powell Street, which was scheduled to undergo structural repairs.) (The restoration of Holy Trinity Cathedral, San Francisco, California, booklet published by the cathedral, [p.4].) [p.212n46]

[…] The Finliandskij plant […] had been established [by Konstantin Slizov in Moscow] in 1774. Nikolaj Dmitrievich Finliandskij, owner of the foundry that bore his name, was the grandson of [Mikhail] Bogdanov, who founded the Great Uspensky Bell in 1817. [p.60; also p.211n24]

At the All-Russian Exhibition in Nizhnij Novgorod in 1896 bells from ten Russian foundries were on display. In his review of these exhibits Nikolaj Findejzen singles out three of the ten foundries for special comment. […] He thought the Finliandskij foundry produced some of the most beautiful bells on display from the standpoint of their external finish and decoration, though he did not find their sound completely satisfactory. [p.63] 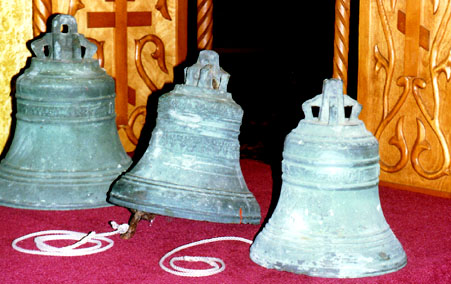 On Saturday, August 28, 1999, as the Cathedral singers went to ring the bells to announce the beginning of the Vigil Service, it was discovered that three of the seven historic bells of the Cathedral were missing. On September 1, 1999, to the great joy of all, the bells were recovered. See articles including Cathedral Press Releases and media reports on this event.